“Above all, DO NOT SPIT. It is an unpleasant habit; but, more important, it is a dangerous one. Sputum is one of the most potent sources of infection: even a report that it is negative is not enough, for it may become positive at any time.”

Excerpt from a ‘Good Luck’ pamphlet made available by the National Association for the Prevention of Tuberculosis (NAPT) for patients leaving the Sanatorium.

Robert Koch’s 1882 discovery of the Tuberculosis bacillus drove the modern understanding of tuberculosis as a contagious disease.

Vaccination swiftly followed, but in Lubeck, France, in 1927 a large number of children were mistakenly vaccinated with an active strain of tuberculosis. This incident halted trials and delayed acceptance of the vaccine. So in the intervening period, and shortly after, the focus was on preventing the spread of tuberculosis (TB).

‘Do not spit’ became a well recognised mantra, and campaign material was distributed across the country. Spitting was so objectionable because lungs defend against disease by producing tubercles on their lining which tuberculosis makes yellow and spongy. The violent coughing fits suffered by tuberculosis patients can cause these to be loosened, coughed up and spat out. So spitting does potentially threaten to spread ‘The Seeds of Tuberculosis (Consumption) and many other diseases…’

So what to do with excess sputum? The National Association for the Prevention of Tuberculosis covers this in one of various pamphlets published to aid TB patients and their families; use your sputum flask! Preferably you should carry two; one to hold the sputum and one to hold the disinfectant. And to dispose of the liquid; flush it down the toilet, along with some more disinfectant. 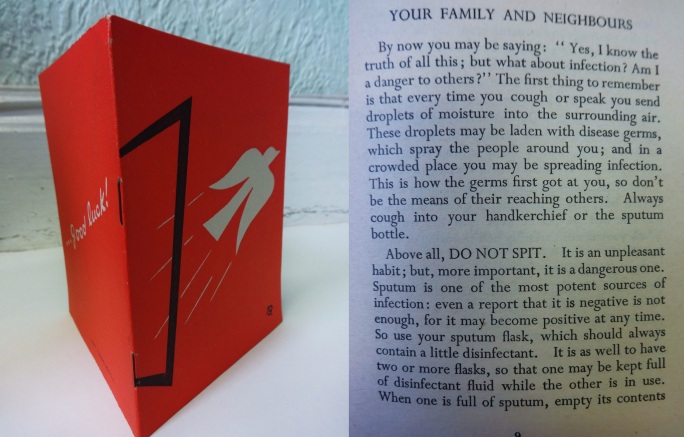 But people were not expected to cope with the disease alone; from the 1880’s Sanatoriums opened in the UK where tuberculosis patients could receive structured care and treatment. Along with lots of well circulated air, this could at first mean total bed rest and no family visits. And the Sanatoriums were fairly unflinching in insisting on their rules:

“It is expected that any patient that cannot adapt herself to these necessary restrictions will inform the Medical Superintendent and make immediate arrangements for transfer to an institution more suited to her tastes.”

(Opening from a 1945 rule book, recorded in a patient’s diary)

In a time before the NHS these sanatoriums were not, however, free – the same diarist records a price of 5 guineas [£130] per week for a private ward that she would stay in for about a year – making them unviable for the lower classes. Nurses did sometimes make home visits and in urban areas dispensaries were set up, but living conditions made following the advice and curtailing the spread of disease challenging.

Post-war, though, the previously mis-administered vaccine developed by Albert Calmette and Camille Guerin (the BCG vaccine) gained widespread acceptance in the UK, as well as Germany and America. And in 1946 the Medical Research Council developed the antibiotic streptomycin, followed later by other more effective treatments.  Prevention; treatment and cure of TB became a reality.